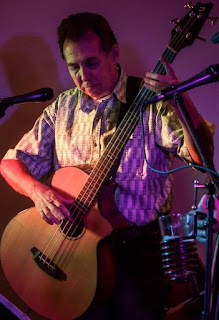 Tom Borg has been playing bass guitar in bands since he was a teenager. He has been adding his bass lines to Geza Keller's vocals and guitar in several bands for the past 21 years, and to Tony DePaolo's for the past 13.

“Tom is the rock, carrying the bottom, steady as she goes,” Geza says.

A true San Diego native, Tom was born in a hospital in North Park in 1956. As Tom grew up in the neighborhood, his father worked as a postman and his mother was a secretary at the North Park Community Church.

When he was 12, he tried playing the drums—first at a friend’s house down the street, and also on some that his father bought him. “I just thought it was cool,” he said of his first instrument of choice.

But he soon lost interest in playing drums, which didn't make his father too happy. Tom's dad vowed never to buy his son another instrument.

So Tom had to make it on his own. By the time he was 14, he was so inspired by the band Cream, and his hero—bass player Jack Bruce—that he saved up $35, just enough to buy his first electric bass guitar. Within a couple of years, he was playing in garage bands.

Other early influences came from the grooves on the 1974 band debut album “Kansas” and the jazz rock fusion sounds of Weather Report.

“Those were exciting times in music,” he says.

By the time he was 20, Tom was playing in underage nightclubs, mostly top 40s songs such as Bee Gees tunes from the movie “Saturday Night Fever.”

“I made more money playing in that band than I ever did in a band again,” he says, recalling the days before the demise of the musicians’ union, when he could make a whopping $40 or $50 a night--a virtual fortune when rent was only $110 a month and a tank of gas cost $5. “I was living like a king.”

Then the era of DJs began, which wiped out many previous performing opportunities and also slashed the fees that club owners were willing to pay musicians.

That didn’t stop Tom. He continued to keep playing, while earning a living as an electronics technician and taking classes at Mesa and City Colleges, and UCSD Extension.

Ultimately, not earning a degree “didn’t hurt me any,” says Tom, a senior software engineer who has been writing programs for the financial industry for the past 17 years. “I was always interested in tech and that led to a career in engineering.”

But music is his passion. Tom has been in more bands than he can count over the years, estimating it’s been a “good 20,” some more short-lived than others.

A particular high point for him was playing with Claude Coma and the I.V.s, a hard-core local punk rock band, for a few years in the early 1980s. The band played mostly in San Diego and also a couple of times in the Bay Area, opening for the Surf Punks, Dead Kennedies and Suicidal Tendencies.

One of his most memorable gigs was opening for the Dead Kennedies in Tijuana.

“Kids were climbing off the speakers and jumping into the crowd,” he recalls. “It was an extreme punk event.” One kid hit the concrete while crowd surfing, hitting the thin layer of outdoor carpeting with a thud and staggering off to the sidelines to recover.

One day a band member excitedly declared, “Let’s go on the road! Everyone quit their jobs!” and almost everyone else chimed in. Tom, the only one who owned a car, felt he had to be the responsible adult and decline, which was a smart move as it turned out.

Another gig of note was opening for John Mayall with the an earlier iteration of breakingthecode (BTC) at the Coach House in San Juan Capistrano in the early 2000s.

“John Mayall is a legend,” he says.

After BTC finished playing, Mayall’s bass player came over and eyed Tom’s bass guitar and amp, which were a definite cut above the rented gear the band had been given to use. “Please, can I use your rig?” he asked.

Tom gladly agreed. “I was going to stay anyway,” he recalls. “I thought it was cool. That’s one of the things about having a day job, you can buy cool gear.”


In 1986-87, he filled in for the bass player in an all-girl band called Luna. And along the way he played in a band with singer-songwriter-guitarist Audrey Marlene, with whom he played again in 2015 as part of her band Kitten With a Whip. He still plays with The Limited Jurisdiction Band, a group of prominent government legal officials that do mostly private gigs and can’t be paid for ethical reasons. Their names cannot be disclosed, because, well, it’s an undercover kind of thing.