Caitlin Rother: Breaking out of the Musical Closet 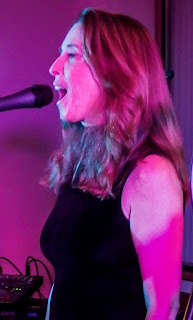 Caitlin Rother had to become a New York Times bestselling author, public speaker and TV/radio commentator before she was ready to take on the new challenge of singing in public.

Trained as a classical pianist from the age of seven, Caitlin had sung occasionally in choruses and other short-term performing groups, but was never able to play and sing at the same time. Most of her piano or vocal performances were conducted alone in the privacy of her shower, car or living room until she was encouraged to sing with Geza Keller, her partner and a longtime leader of many bands.

After trial by fire and plenty of rehearsals, Caitlin is now doing what she never knew she could: playing the keyboard and singing vocals with the four-person acoustic group breakingthecode.

It was a long time coming, but looking back it really isn't all that surprising. She had all the pieces in place, it just took some time for her to break out of the musical closet.

Born in , , Caitlin is the daughter of two former . Her Canadian father wrote a play in which her British mother acted, and both won national awards for their roles.

Caitlin was one year and ten months old when her family moved to California in 1964, first to Santa Barbara, where her parents completed their PhDs in literature at UCSB, then to , where they got jobs at . In the early 1970s they moved to , where her mother, Carole Scott, now lives with Caitlin’s step-father, Chris Scott.

Caitlin’s parents gave her a rich arts education, exposing her to musical and theatrical performances in the In , for example, her mother took her to see the musicals “Annie,” “Oliver” and “Cats,” a classical concert at the Royal Albert Hall, Chaucer’s play “Canterbury Tales” and Shakespeare’s “Midnight Summer Dream.” Caitlin also attended several plays and musicals in New York City. But for many years, Caitlin saw herself more as an arts enthusiast than a performer.

Like Geza, the founder of breakingthecode (BTC), Caitlin grew up with music playing constantly at home, where most every wall was lined with books and record albums. Her father, James Rother, taught himself to play clarinet, saxophone and piano by ear (he couldn’t read sheet music) along with his records, which also included classical music, opera and Broadway musicals. He often had stereo wars with the neighbors as well as his own family, who could not sleep with “Side by Side by Sondheim” blaring. Her mother often reminds her that one of her uncles led songs at temple as a cantor, and that her paternal grandmother’s maiden name actually was Canter.

Caitlin began piano lessons at seven. For seven more tedious years, she played Mozart, Beethoven and Chopin, but hated practicing. She also had tremendous anxiety about playing in front of people, so she rarely participated in recitals. She was a skilled sight-reader, but couldn’t play without sheet music. She also tried acting in a couple of plays, but was too shy to pursue that any further.

As soon as she stopped taking piano lessons she found a new joy in playing. Finally practicing every day, she soon grew more comfortable playing for others, especially on a friend's grand piano.

Meanwhile, Caitlin sung with the chorus as a soprano, and enjoyed singing along with pop, rock, jazz songs or musicals such as “West Side Story” or “A Star is Born.”

During and after college at UC Berkeley, where she earned a bachelor’s in psychology and discovered her talent for journalism, she kept up her piano skills by seeking out pianos on local campuses, such as the concert grand in her dorm at Boalt Law School, where she lived and also taught aerobics classes.

While working in corporate communications for a cruise line in , Caitlin was asked to audition for the UC Berkeley Glee Club. She was accepted, but never went back. She was, after all, a closet singer.

During grad school at , she discovered a love for the blues (and adventure) at the Checkerboard Lounge on ’s south side. After completing her master’s degree, she landed her first newspaper job—in rural . When her roommate invited her to join a community theater production of a Noel Coward musical, she wanted a singing part, but she was the only pianist in the group. She couldn’t do both.

Taking her next newspaper job in , she spent her first night in town at an open mic, where she met her future boyfriend, the lead singer-songwriter in a funk band. When he suggested she sing back-up on “Bust a Move,” she declined. She bought a Korg keyboard there, a digitally-sampled grand piano, which she brought back to  when she went to work for the Times.

After a year each at the Times and the Daily News in , she took a job at The San Diego Union-Tribune. She dedicated days to her news feature writing and investigative reporting skills and weekends to crafting a mystery novel.

After a short marriage that ended tragically, she treated herself to the 10-day Bread Loaf writing conference in , where she made a breakthrough discovery. Every lunch break she sung with an a capella group that performed several times during the conference. Asked again to play piano accompaniment, she insisted on just singing this time, blending harmonies in the small tenor section.

She looked for a group in to sing with, however her job and novel writing didn't allow time for another hobby. Thanks to a small miracle, however, Caitlin was finally able to afford her own baby grand piano in 2000, and after practicing every day for four months she mastered Debussy’s “Passapied.” She tried singing with some girlfriends, but ended up at the piano again.

After publishing her first book, “Poisoned Love,” in 2005, Caitlin quit her full-time newspaper job in 2006 to pursue her dream of becoming a full-time author. Twelve years later she is now a New York Times bestselling author, has just finished book #12, and is working on #13, 14 and 15.

Caitlin had to overcome her initial stage fright to give speeches and promote her books, and has since done more than 200 TV and radio interviews, many of which aired nationally. She has finally grown to enjoy being on stage or live on camera.

But her singing comes from the heart. In 2007-08, she experienced a prolonged flare-up of back, neck and arm pain from long hours at the computer, icing four times a day to deal with frequent muscle spasms.

Singing was the only thing that brought her any relief. Belting out the songs on Linda Ronstadt’s album of standards, “Round Midnight,” Caitlin cried and smiled as she felt the pain and spasms let go. The more she sang, the stronger her voice grew, and the more her mood improved.

“It was better and more healing than any physical therapy—and it was free,” she recalls.

Once she felt better, she rediscovered her love for live music by attending shows by the retro dance band, FakeBook, with her longtime friend Daria, who was married to Tony de Paolo, a guitarist and singer in the band. Tony's friend, Geza, the lead singer and guitarist, was always friendly and winked at Caitlin every once in a while. Geza would ask the band to play “Old Love” by Eric Clapton when she requested it, even when his band-mates didn’t really want to do it anymore.

FakeBook played at Caitlin’s book launch party for “Naked Addiction” in 2007, and sometime later, Tony invited her, Geza, and some other friends over for a sing-along. It was fun, but she was still shy and intimidated by the notion of singing with two guys who played together in a band. In public. She, did, however, venture out a few times with friends to sing karaoke—“Crazy” or “You Took Advantage of Me.”

Fast forward to 2012. Geza and Caitlin started dating. He asked her to sing along with him at a few parties (he brings his guitar everywhere), and they also sang together at home or with family for fun, which also prompted Caitlin’s stepfather to encourage her to sing publicly. Geza suggested she pick a few songs where he would play guitar and she would sing alone, or where he would join her for the chorus.

As they kept adding to the list, they were practicing every weekend until Geza finally asked her to join his acoustic group, breakingthecode, comprised also of Tony and Tom Borg, who had all played together in FakeBook.

In recent months, Caitlin and her three engineer bandmates have been playing at private parties, recording audio and video in the studio, and play the occasional gig at a bar or the Del Mar Fair. In between their busy day-job schedules, they are always looking forward to the next upcoming gig.

“I would have never even thought about singing like this if I hadn’t gotten over my shyness and fear of speaking in public first,” she says. “But just like with my speeches, the bigger the group the better I do, because there is more energy in the room. When I can see and feel that I am reaching and engaging people, there's no other feeling like that.”

It took a while for friends to get used to the idea of Caitlin joining a band. “You sing?” they asked in disbelief. “Why didn’t I know that?”

She is grateful to have found this new creative outlet, which also seems help her writing by providing a welcome distraction to looming deadlines and by bringing some light into the darkness of covering murder cases. She likens it to acupuncture, where the skin is pierced to let the energy flow in a different direction.

“Singing makes me feel more alive, invigorated by achieving a new accomplishment and developing a new skill,” she says. “It also makes me feel fresher when I come back to my writing. It’s really gratifying when friends tell me they’re inspired by my willingness to take a risk and try something new at my age, and that it makes them want to try something new too.”

Life is too short to live in fear and hide from new challenges, she says. She’s also already learned the hard way that striving for balance in work and play is crucial to her health and continued success.

Posted by Caitlin Rother at 1:35 PM